Du bist hier: Startseite / Reviewing your own source texts in the self-service portal

You are here: Homepage / Reviewing your own source texts in the self-service portal
Process optimization

Reviewing your own source texts in the self-service portal 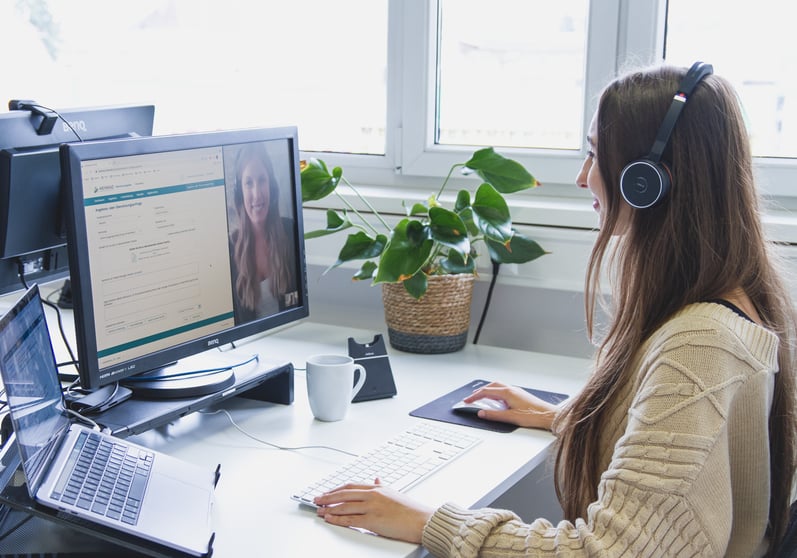 Technical editors often want to review source texts for errors before they publish them and get them translated, and of course they generally prefer to do it themselves. Although there are various tools on the market such as Congree and Acrolinx, a better value alternative is to use MEINRAD’s self-service portal to check your source texts.

It pays off to check technical documents and other texts for errors before releasing them – after all, the quality of your products and translations will be heavily influenced by the quality of the source texts. Source text checking has the following aims:

So there are good reasons to check your own source texts. The self-service portal uses computer software: instead of a person reading through the text, the software identifies formal errors which can then be corrected by the technical editors.

There are various tools to help editors fix errors in their source texts, such as Congree and Acrolinx, which can be integrated into authoring systems and will flag up errors even while the texts are being written. The problem is, this software costs a lot of money – and it’s common knowledge that technical documentation departments rarely have a generous budget. A better value alternative is source text checking using MEINRAD’s self-service portal. It can be used in an internet browser, so there’s no need to install any software.

Checking your source texts in the self-service portal is easy

To begin checking your source texts, log in to the portal, create a new job, and upload the text in the existing file format. In the background, the system will check the text according to the previously specified criteria. The sentences with errors will then be displayed clearly in the web-based interface, with a description of the error and a suggested correction. You can then go through these segments and correct the errors. When you’re done, you can export the file so that it’s ready to download in the format you’re used to – then all you need to do is import it back into your authoring system or save it.

Source text checking works with all common file formats. The portal is available 24/7 and can be used independently by all staff who you decide should have access.

Checking source texts in the self-service portal involves reviewing the texts according to formal criteria. There are seven categories of errors that can be identified:

Every time an error from one of these categories occurs in the text, a warning is generated. 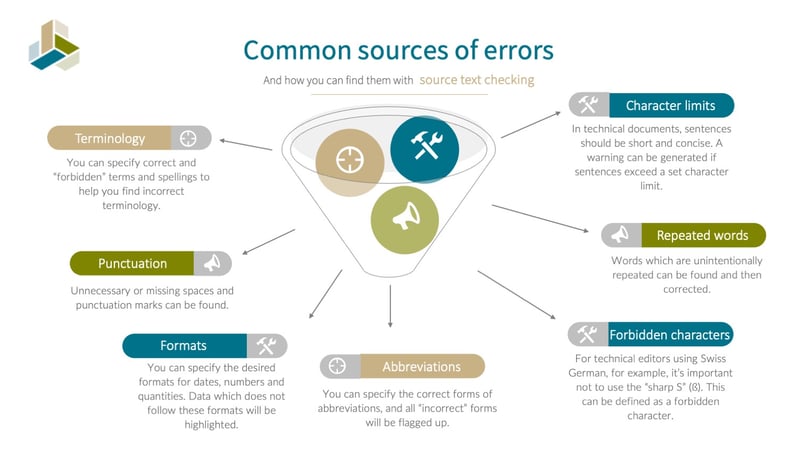 Common errors and how they are displayed

The following two examples illustrate how errors are displayed in the self-service portal. They feature two common sources of errors: incorrect terminology and problems with punctuation.

A frequent problem is the use of different terms to refer to the same object, or use of terms that you would much rather stop using and have “forbidden”. Checking your source texts helps you quickly find out whether the specified terminology has been used consistently. 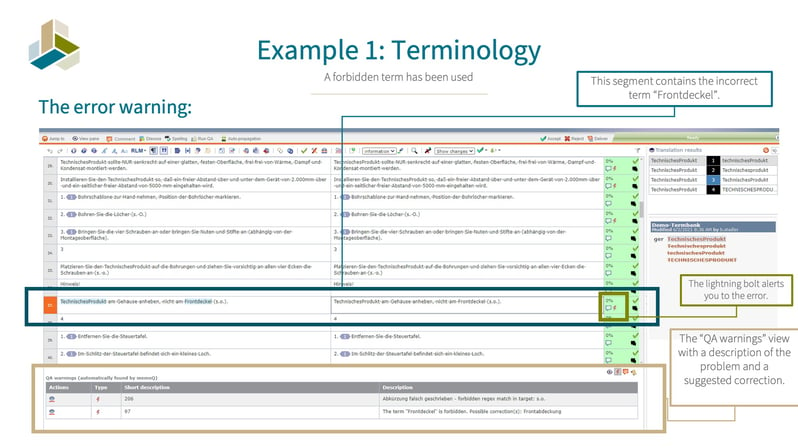 The error is described in the box at the bottom, and then you can simply correct it.

Punctuation errors such as double spaces and missing brackets or quotation marks are the kinds of mistakes that occur “in the heat of the moment”, and they can also be identified with automated source text checking: 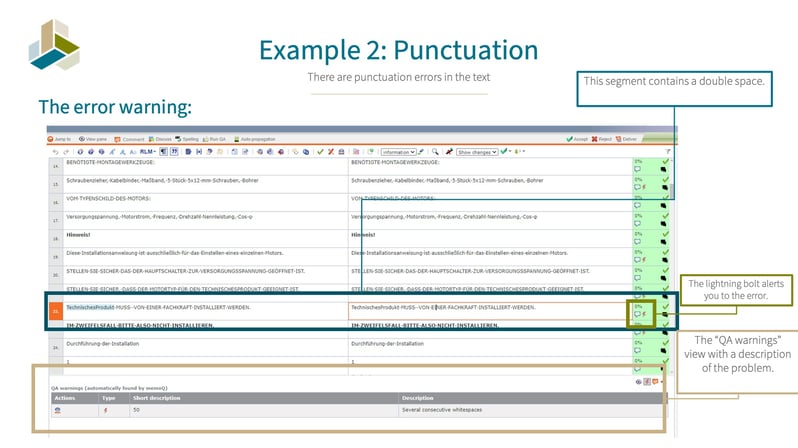 The text checker is ruthless and reliable at reviewing the text according to all other formal criteria, such as incorrect number or date formats (e.g. 1,000 in English vs. 1.000 in German), repeated words, forbidden characters (e.g. the “sharp S” (ß) in Swiss German) or sentences which are too long. It’s the quick and easy way to correct and optimize texts so that they’re ready for publication and/or translation.

5 steps for structuring the long-term process of buying translations